Well, if my best friend Denise is any indication, I must be pretty scary! She could only put up with knowing me for about a year and a half, and now she's gone about as far away as she possibly could. She's gone to explore Australia, the land of shrimp on the barbie, Bruces and Sheilas, and Aussie Rules Football. Check back once in a while for status updates, and if I get any interesting notes from her I'll post some of 'em!

Note: With some browsers on some machines, you may have to refresh your display in order for all of the colours to show up properly. If the colours seem odd, it's probably you. 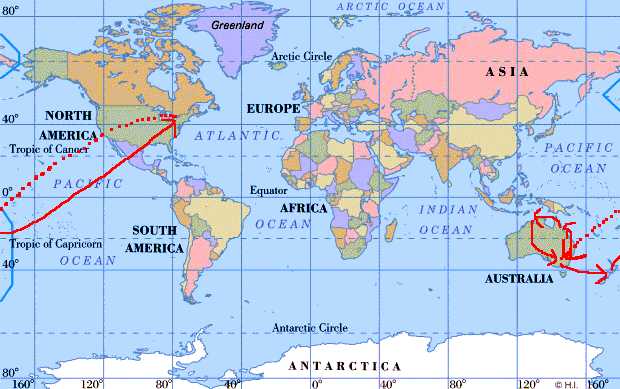 Sometime in late 1996: Denise decides she's going to Australia, tells her boss she'll be leaving, and sells her car.

Sunday 26 January 1997: She loans her cat to a friend for safekeeping.

Monday 3 February 1997: Away she goes! Denise hops on a plane and takes her friend Joyce along with her. I think Joyce got a seat rather than being checked baggage or anything like that.

Tuesday 4 February 1997: This day basically doesn't exist. The flight crosses the International Date Line (I've never tried it, but I think it's a phone sex thing for people with accents) and a whole day vanishes, just like magic. Actually, more like a tax-deferred retirement savings plan; you get it back later. I guess they must have a warehouse somewhere where they store all the days people lose across the line, and they'd need some spares as well for the people who go the other way first and get a free day for a while.

Wednesday 5 February 1997: After being in the air since two days ago, the plane touches down. Freedom at last!

Friday 14 February 1997: I got a postcard from her. Apparently the weather in Oz is much, much nicer than it is here. The people are wonderful, the beaches are great, the sun is shining, and she's having a blast. Meanwhile I'm stuck here in the snow and cold weather. Hrmph.

Sunday 16 February 1997: Finally, after almost two weeks, she hooks up to the Net and checks her email. It's beyond me how anyone can live that long without Net access. She must really be roughing it!

Monday 24 February 1997: Denise visits Torquay in Queensland and declares "I have found Paradise."

Monday 3 March 1997: Just got another email update. She's hanging out on a beach on Magnetic Island, off the coast of Queensland, and trying to get a job as a bartender on a bar that's right on the beach. Like that counts as working? Some people just can't handle a real job, eh?

Tuesday 11 March 1997: Cyclone Justin was threatening to attack Magnetic Island, so Denise wandered back to the mainland. Justin then decided he was going to aim for the mainland rather than Magnetic Island. Will Denise escape or will she get run over by a cyclone? Oooooh, don't you just love a cliffhanger?

Wednesday 12 March 1997: Tomorrow morning, she leaves for Cape Tribulation for a three-day wilderness adventure. Cape Tribulation is the most northern part of Australia's east coast and is mostly rainforest. Weather update: Justin has been downgraded and is keeping well off the coast.

Sunday 16 March 1997: Denise just returned from her Cape Tribulation safari and says "It was absolutely breathtaking. A jungle, virtually untouched by man. Only one road in, 2 hostels, and one General Store. It is the only place where the Reef meets the Rainforest. It was extremely lush, and dense. I felt like I was in land of the giants ... the spiders were the size of my hand, and there was some kind of hard shelled beetle the size of my palm eating a banana on the counter where I checked in! The plants were 10m high the trees about 40m with amazing canopy above."

Thursday 10 April 1997: She's bartending at a bar called Moose's Place in Darwin. It holds about 1400 people. So if you're in the area, drop by; I'm sure she'll be the best-looking bartender there. And probably the only one with a Canadian accent.

Thursday 22 May 1997: Just a quick update. She's still in Darwin and having a great time.

Tuesday 27 May 1997: In typical Denise fashion, she snared a promotion from bartending to being in charge of promotional activities! She's gonna stick around in Darwin for a few months, and then continue her tour of Australia later in the year.
It's late autumn, almost winter, down under. For Darwin, apparently, that means 25C in the morning, 30-35C in the afternoon, and no rain. Must be rough! Particularly for yacht racing, which is her latest pastime!

Tuesday 10 June 1997: The bar where she works is having a promotion soon where patrons can win tickets to the Silverchair concert on the 20th. Since the latest Silverchair album is called Freakshow, they're having a freak show. And that includes the staff, who will be body painted and wearing all kinds of odd clothing and stuff. If anyone's there, tell me just what kind of mischief Denise gets up to :-)

Tuesday 24 June 1997: She's no longer working at that bar. She decided she wanted a change, so now she's managing the lobby bar at the Beaufort, which apparently is a five-star hotel. So in her escape from civilization, makeup, high heels, and stuff like that, she's working in a place where she has to be civilized and wear high heels and makeup :-)

Monday 21 July 1997: After discovering that five-star hotels tend to have snobs in them (and I'm not referring to the clientele), Denise has changed jobs yet again. She's now working as a consultant, rethinking everything about how her client (a printing shop) runs their business. From stationery to brochures, from policies to procedures, all that jazz.

Monday 25 August 1997: Your humble correspondent has recently returned from a fact-finding trip to Australia. Dee shares a two-bedroom flat with a backpacker from New Zealand. Her flatmate ("flattie" in Australian slang) has a shaved head. So do many of their friends. Denise is, to a large degree, responsible for this. If you see a twenty-something person with a shaved head wandering around Darwin, chances are it's her handiwork.

Tuesday 2 December 1997: After going incommunicado for about three months, Dee has finally surfaced again. This time, she's in Braidwood, which she describes as a "big town (not)" just outside of Canberra, where she'll be spending Christmas with a friend's family. On 28 December, she flies to New Zealand, and on 19 January she'll return home to Toronto.

Saturday 24 January 1998: Can you believe that she waited five days after coming home before even calling to say hi or to ask how her cat is doing? Hrmph.

Monday 9 February 1998: Dee starts her new job. Life is starting to get back to normal.

Saturday 28 February 1998: Dee moves into her new apartment. Only one more thing left ...

Insult of the Year award: "You're the product of a load that should have been swallowed!"

For more Aussie slang, try this.

Places to Stay, Things to Do

Dee recommends:
You are visitor

since sometime in July 1997